It shall be really interesting in Copenhagen on Saturday when Denmark faces Belgium at the Telia Parken Stadium. This is a game from Group 2 of League A of the UEFA Nations League. Stay with us and our free soccer tips professional betting for this fixture. 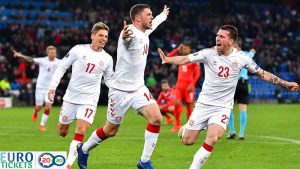 Denmark are anticipating the Nations League in a terrific mood and they have enough reasons for this. The Red Dynamite qualified for the Euro 2020 and they will be part of the competition next summer. The decisive result for this was the 1-1 draw against Republic of Ireland in Dublin. It was Barcelona’s Martin Braithwaite who scored the winning goal for the Scandinavians.

At this moment Denmark are lucky to have a talented team with many players from Europe’s top leagues. Among the leaders of this team are Leicester City’s Schmeichel, Olympique Lyonnais’ Andersen, Chelsea’s Christensen, Milan’s Kjaer, Borussia Dortmund’s Delaney, Inter Milan’s Eriksen and Valencia’s Wass. Also, we should not forget about Barcelona’s Braithwaite, Hoffenheim’s Bruun Larsen and Parma’s Cornelius. All of them are called for the next two matches.

Belgium proved during the Euro 2020 qualifiers that they are one of the best teams in the world at the moment. The Red Devils won 10 of 10 matches in the qualifying campaign and they conceded just 3 goals – something which is absolutely phenomenal.

Many pundits believe that Belgium have still not reached their peak. They reached the 1/2-finals of the World Cup two years ago, but they are still hungry for more. Winning the Nations League would be a great thing for this talented team.

Belgium’s manager Roberto Martinez called many of his top players for the next two games. Thibaut Courtois, Eden Hazard, Romelu Lukaku, Dries Mertens and Axel Witsel are all ready to play.

In these free soccer tips professional betting we really believe that Belgium are the top team here, but they might face some difficulties against Denmark. The Scandinavians improved in the last few years and it won’t be easy for the visitors.